Cinnamic acid is an organic compound with the formula C6H5CH=CHCOOH. It is a white crystalline compound that is slightly soluble in water, and freely soluble in many organic solvents. Classified as an unsaturated carboxylic acid, it occurs naturally in a number of plants. It exists as both a cis and a trans isomer, although the latter is more common.

Cinnamic acid is a central intermediate in the biosynthesis of myriad natural products include lignolsto lignin and lignocellulose, flavonoids, isoflavonoids, coumarins, aurones, stilbenes, catechin, and phenylpropanoids. Its biosynthesis is performed by action of the enzyme phenylalanine ammonia-lyase (PAL) on phenylalanine.

Cinnamic acid is a precursor for the synthesis of a huge number of plant substances, including lignin, tannins, flavonoids, pigments, many of the flavor components of spices, and various alkaloids, such as morphine and colchicine.

Cinnamic acid is an important substance because it is widely used in perfume, food, photographic, polymer and pharmaceutical industries, as well as for clinical and toxicological studies. Until now, many methods have been reported for its determination, such as titrimetry, differential-pulse polarography, spectrophotometry, mass spectrometry, HPLC, electrokinetic capillary chromatography, capillary electrophoresis, gas chromatography and liquid chromatography. However, there are many disadvantages over these methods, such as long-response time, reagent consumption, complicated operation, etc.

It can be used as an aromatic mixture in soaps, shampoos, washing powders, and daily cosmetics. Cinnamonic acid is used in apple flavor, cherry flavor, fruit flavor, and floral fragrance. It has the effect of inhibiting the formation of black tyrosinase, has a certain insulating effect on ultraviolet rays, can make brown spots lighter or even disappear, and is one of the essential ingredients in advanced sunscreen. Cinnamic acid itself is a kind of spice, which has a good aroma-retaining effect. It is usually used as a raw material for fragrant, which makes the aroma of the main fragrance more volatile.

In the pharmaceutical industry, it can be used as an important drug for the synthesis and treatment of coronary heart disease. It can be used as a heart-to-heart and heart-to-heart, as well as synthetic chlorpheniric acid and cinnamyl piperazine. It can be used to make "Xin Kean", local anesthetic, fungicide, hemostasis. Medicine, etc. Chlorobenamide and cinnamyl piperazine can also be synthesized for use as a spine bone relaxant and an antispasmodic agent. Mainly used for cerebral thrombosis, cerebral arteriosclerosis, coronary artery cirrhosis and other diseases. It has a significant inhibitory effect on the proliferation of lung adenocarcinoma cells.

In terms of organic chemical synthesis, cinnamic acid can be used as a sustained release agent for galvanized sheets, a heat stabilizer for polyvinyl chloride, a crosslinker for polyurethane, a flame retardant for hydantoin and polycaprolactam, and a chemical analysis reagent. It is also a reagent for determining the separation of uranium and vanadium; it is also the most important synthetic raw material for negative-type photosensitive resins. The main synthetic lauric acid ester, polyvinyl alcohol cinnamate, ethyl ethoxy cinnamate and epoxy resin with pendant cinnamate. Used in plastics, it can be used as heat stabilizer for PVC, anti-mold and deodorant for sterilizing, and can also be added into rubber and foam to make deodorant shoes and insoles. It can also be used for cotton and various synthetic fibers, leather and paint. Prevent mildew in products such as shoe polish and straw mats. 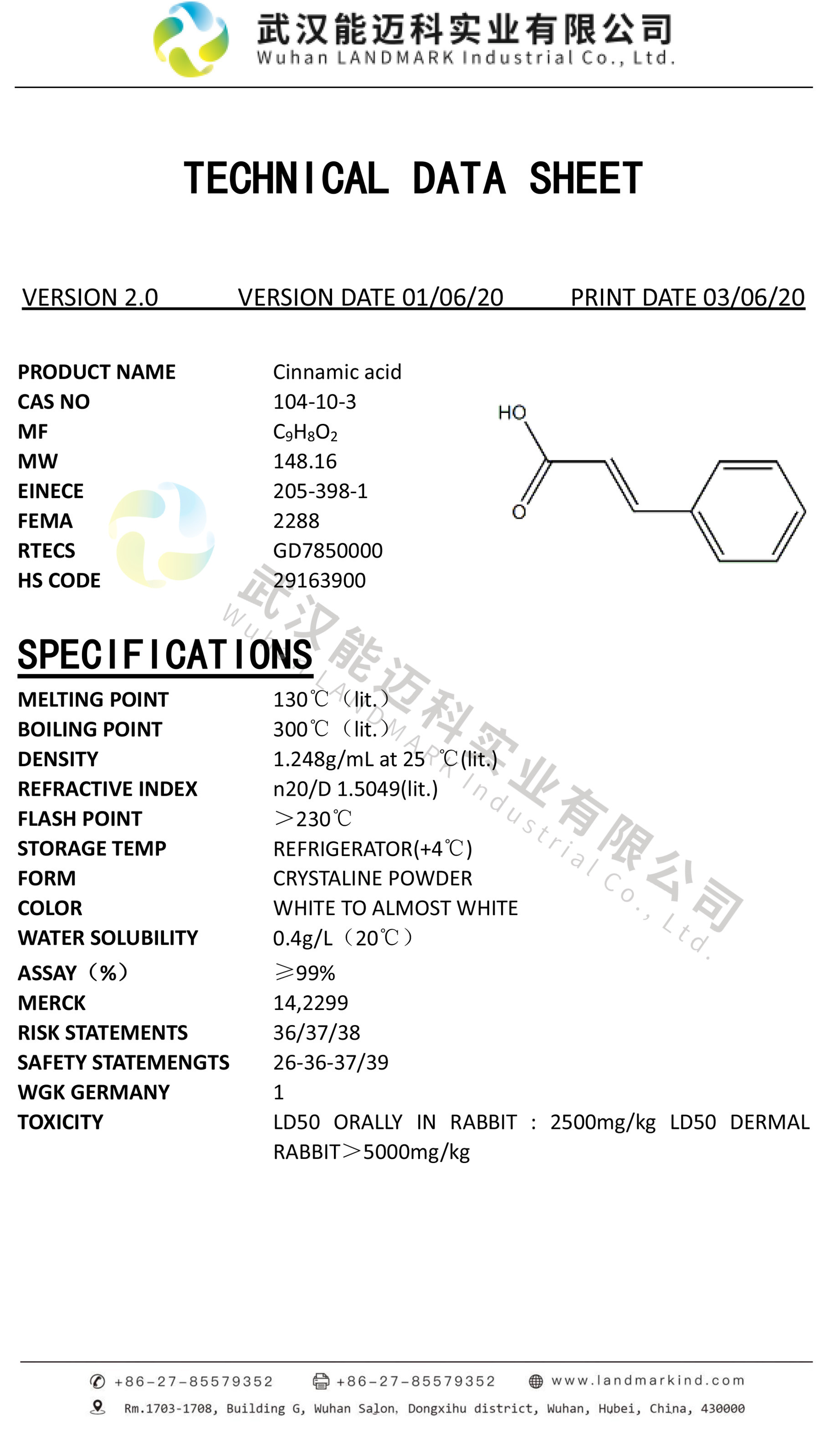 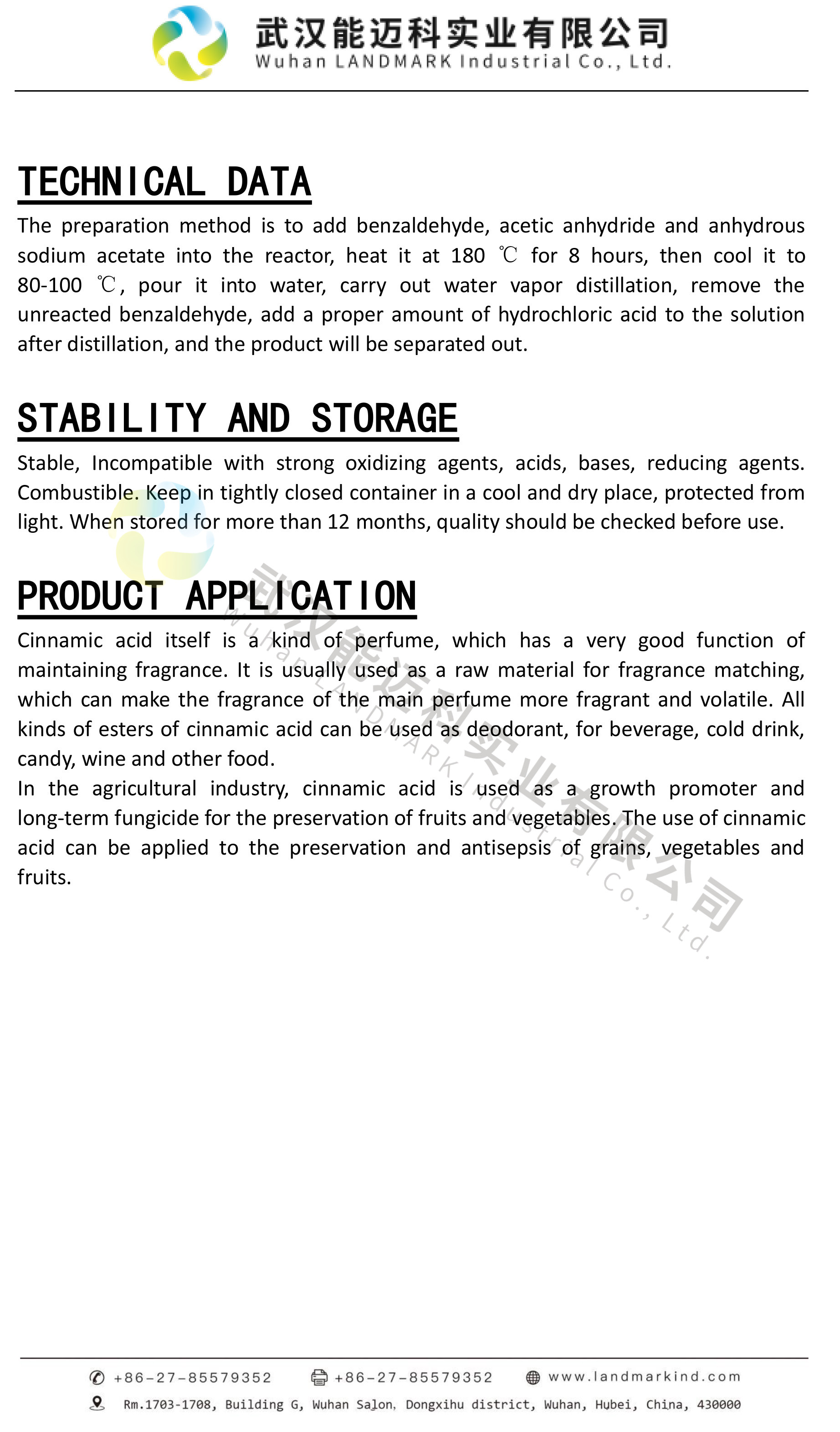