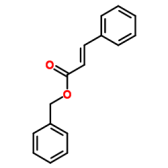 Use of Benzyl Cinnamate:

Benzyl cinnamate is used as an ester synthetic perfume, mainly used as a deodorant for oriental essence and artificial cologne, and also as a soap fragrance. Used as a UV absorber. Mainly used in sunscreen and tanning cosmetics. The maximum absorption wavelength for ultraviolet light is 310 nm. The amount added is usually less than 5%. It is used in the flavoring formula, and is usually used to blend fruity flavors such as apricot, cherry and pineapple.