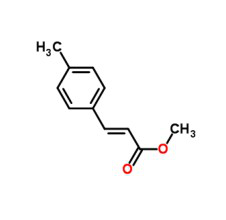 1. Prepared with anhydrous ethanol as solvent and 10% NaOH as catalyst, but the method has long reaction time and side reaction.

Should be more, product yield is low, production efficiency is poor.

2. The acetic acid ester is used as a solvent and the sodium alkoxide is used as a catalyst to condense. This method improves the product yield, but the post-treatment is complicated and the purification is difficult. In the preparation, a large excess of the raw material ratio of the acetate is used, and the excess acetate is prone to ester condensation reaction under a strong basic catalyst, and a large amount of by-products are formed, which leads to difficulty in product purification.

In addition, methyl cinnamate is mostly obtained by reacting p-methylbenzaldehyde with acetic anhydride or malonic acid to obtain p-methylcinnamic acid, followed by esterification with methanol to obtain methyl p-methylcinnamate. Because of the existing process steps, poor production conditions, low product yield, high cost and serious pollution, it does not meet the requirements of green production.

1) stirring and mixing with ethylene glycol dimethyl ether as a solvent and lithium diisopropylamide as a catalyst, and then stirring slowly Add p-methylbenzaldehyde dropwise, keep the temperature below 5 degrees Celsius

3) The above solution is separated into an organic layer, and the solvent and excess p-methylbenzaldehyde are recovered under reduced pressure to obtain a white solid, which is washed with water and dried to give a crude product. Recrystallization from absolute ethanol gave 4-methyl cinnamic acid methyl ester.

The invention has the advantages of low raw material cost, mild reaction condition, and methyl p-methylcinnamate obtained by one-step reaction, and the method is simple, easy to operate, high in yield, stable and reliable in product quality, and non-polluting to the environment, is a kind of green The method of synthesizing fragrance.