12 Harmful Food Additives and Preservatives You Should Avoid 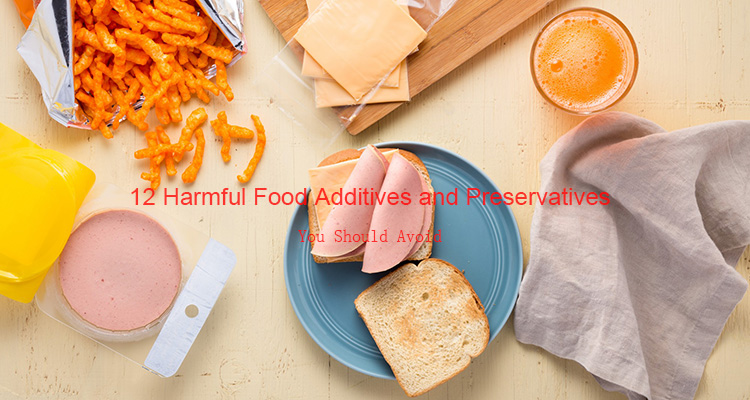 Actually, there are lots of reasons why food additives and preservatives are used in our daily life. One main reason is that they can help maintain and improve freshness by slowing product spoilage caused by mold, air, bacteria, fungi or yeast while helping reduce the risk of contamination. In some cases, additives and preservatives may help improve or maintain nutritional benefits.

What's more, food additives and preservatives can be used to improve taste, texture and appearance. For instance, emulsifiers, stabilizers and thickeners give foods the texture and consistency consumers expect to find when enjoying certain products. Cinnamic acid (C9H8O2) is an organic acid isolated from cinnamon bark and generally used as a common food additive being antimicrobial against common postharvest pathogen. Some leavening agents help baked goods rise, another expected attribute, while many additives affect the acidity and alkalinity of certain foods. Commonly, additives and preservatives are used to provide a delicious taste while reducing the fat content.

Ultimately, understanding additives and preservatives is important because it can affect your health.

Here is a list of 12 harmful food additives and preservatives you should avoid:

Potassium bromate, or simply called bromate, is an oxidiser used to strengthen dough and enhance its elasticity. This helps bake uniform and whitened bread.

Potassium Bromate has been labeled as causing tumors, toxic to the kidneys and may even cause DNA damage. Though once baked, it converts to potassium bromide which has been deemed as non-carcinogenic, some residues exist.

It has been banned in the United Kingdom, European Union and Canada in food, but the United States still allows it to be added to flour.

Monosodium Glutamate (MSG for short) is used to flavor food. MSG is created by a naturally occurring chemical called glutamate and looks similar to salt or sugar crystals. While glutamate is tasteless, it has the ability to enhance flavors. It is typically found in Chinese food, canned foods, and processed meats.

However, some foods such as tomatoes, soybeans, and seaweed naturally contain glutamate, and some researchers suggests that glutamate, also known as Umami, is the another essential flavor that our taste buds can detect, in addition to sweet, salty, bitter, and sour.

This stuff is harmful because it inhabits natural growth hormone and dramatically promotes irreversible obesity. Other reactions include headaches, nausea, weakness, a burning sensation in the back of neck and forearms, wheezing or difficulty in breathing, and changes in heart rate, pulse rate, and/or heart palpitation.

Sodium benzoate is the sodium salt of benzoic acid. It is used as an antifungal preservative in pharmaceutical preparations and foods. Sodium benzoate is often added to acidic food products such as sauerkraut, jellies and jams, and hot sauces; however some foods, like cranberries, cinnamon, prunes and apples, naturally contain it. It has been suggested that it may help treat hyperammonemia in terms of medication.

Concerns have been raised regarding it as a possible cause of hyperactivity in some children, though more studies are needed according to The European Food Safety Authority.

This is another harmful food preservative used to preserve meat. Sodium Nitrate is added to most forms of processed meat like bacon, ham, and sausage. This nitrous acid is quite dangerous for the body and can lead to stomach cancer. European nations like Norway and Germany have banned sodium nitrate's use as a food preservative

These compounds are usually used to preserve dry fruits, canned fruits, corn syrup, pepper, canned olives and wine and vinegar. These compounds lead to varied side effects like palpitations, allergic reactions like asthma and rhinitis. Sulfites also induce joint pain, headache, and can even cause cancer in some cases.

Sulfur additives are toxic and the United States has prohibited their use on raw fruit and vegetables. Adverse reactions include bronchial problems, particularly in those prone to asthma, hypotension (low blood pressure), flushing, tingling sensations or anaphylactic shock. It also destroys vitamins B1 and E. Not recommended for consumption by children. The International Labour Organization says to avoid Sulfur Dioxide if you suffer from conjunctivitis, bronchitis, emphysema, bronchial asthma, or cardiovascular disease.

Propyl paraben is commonly used as a preservative in many foods including tortillas, bread products and food dyes; and cross contamination has lead to propyl paraben showing up in beverages, dairy products, meat and vegetables. It is commonly found in many cosmetics, such as creams, lotions, shampoos and bath products.

A federal study showed that 91 percent of Americans tested had propyl paraben in their urine. This is of concern since propyl paraben is an endocrine-disrupting chemical that is“Generally Recognized as Safe”. Studies indicate that subjects had decreased sperm counts and testosterone levels. Additionally, it has been shown to alter the expression of genes, including those in breast cancer cells and to accelerate the growth of breast cancer cells. Harvard School of Public Health shared the results of a recent study linking propyl paraben to impaired fertility in women.

Propyl gallate is generally used in meat products, pickles, sauces and even chewing gums. It is a harmful preservative that can cause complications at birth and even lead to liver damage in the long run. It can also lead to many other problems including breathing ailments and is banned in many countries .

These chemicals are usually used to preserve foods like cakes, pies, cookies, bread and peanut butter. Mono and Di-Glycerides also help preserve other foods like roasted nuts, veggies packed with sauce and even margarine. Monoglycerides regularly feature on the list of bad or unhealthy fats.

These oils are used to preserve bottled juice for extended periods of time. Brominated juice is used quite widely and can lead to potential damaging and serious side effects. Brominated oils can trigger changes in heart tissue, kidney damage, thyroid swelling, increase fatty deposits in your liver and can even cause withered testicles. Many countries have insisted that Brominated oils be banned for preserving bottled drinks.

These two preservatives are regular additives of ice cream. Propylene glycol is usually used as an antifreeze and a paint remover. It is the more sinister chemical out of these two preservatives, and many countries have discontinued its use. The other preservative mentioned here, carboxymethylcellulose, is a stabilizer. It is usually used in salad dressing, cheese spread, and chocolate milk. A study on rats concluded that carboxymethylcellulose instigates tumor production. CNS depression is one of the major side effects of propylene glycol.

Drink lots of pure water or spring water to flush out toxins from your body and have some fresh raw vegetable juices to replace the minerals that you lose by drinking lots of water. Sleep at least 8-9 hours per day to strengthen your body's immune system. Exercise to relax your body and mind. Also important, the less TV you watch, the less you will be exposed to food advertising, and the less processed food you will eat. And finally, be mindful of what you eat. All of this will not start from day one for everybody but you can do all of these step by step and before long you are doing all to keep your body healthy and yourself out of hospital.